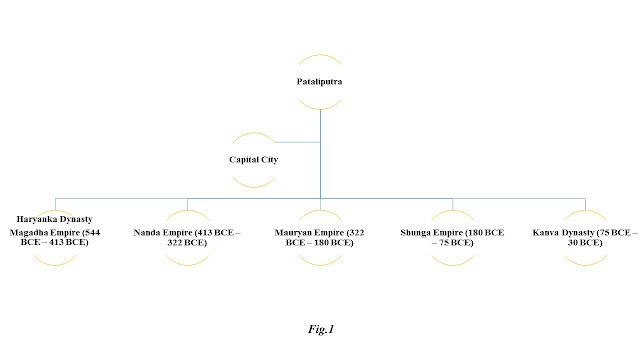 Pataliputra is the ancient name for present day Patna and the adjoining areas, the city that is the capital of the Indian state of Bihar. Pataliputra has carved itself a niche in ancient Indian history and occupies a spot that it shares with few others.
According to most historians the city was in existence as early as 544 BCE when the Haryanka Dynasty was ruling the kingdom of Magadha, and shifted the capital of the Magadha Empire from Rajgir, another town in the state of Bihar to Pataliputra.
It is difficult to say with any degree of certainty how old the kingdom of Magadha really is but it’s mentioned in the Hindu epic Mahabharata which sets the stage for the mammoth battle of Kurukshetra which took place at about 3,000 BC.

In the epic, Yudhishthira, the eldest of the Pandava brothers, sought to consecrate himself as emperor and intended to perform a Rajasuya, the act of declaring oneself an emperor, and having made up his mind to do so he sought the advice of Shree Krishna, who told …
Post a Comment
Read more

By Kathiresan Ramachanderam - July 16, 2020
Following its inception in 1600 and after it had obtained permission from the Mughal Emperor Jahangir to set up its first trading outpost in Surat in 1615, the British East India Company started establishing settlements and building factories and soon in order to expand it had its agents lookout for port cities where ships could anchor.
The first port city or the first major British East India trading outpost was established in Madras, all the port cities that were established would go on to become major trading hubs and would continue to operate well after the British East India Company ceased operations.
The outpost in Madras was established after one of the company’s agents, Francis Day, who was searching for a suitable location in the south, because important commodities like textiles and spices were cheaper in the south, stumbled across Madras. The city was subsequently leased from the Raja of Chandragiri, the initial lease was for 2 years and started in August 1639.
By St. George…
Post a Comment
Reactions:
Read more

By Kathiresan Ramachanderam - July 16, 2020
In 1690 following its defeat in the Anglo Mughal war of 1686 – 1690, the British East India Company abandoned its outpost in Chittagong and control of Chittagong reverted back to the Mughals and the Mughal general there, Shaista Khan, and moved its operations to Calcutta. The port city would become the third major British East India Company outpost in the subcontinent.
Calcutta is located in the fertile Ganges River basin, on the banks of the Hooghly or Hugli River which is a tributary of the Ganges River and flows into the Bay of Bengal. It was founded by Joy Charnock an employee of the East India Company in 1690. Charnock assumed the position of agent and Chief of the Bay of Bengal in 1685, a year before the start of the Anglo-Mughal War.
The Bay of Bengal is the largest bay in the world, and occupies and area of 2,172,000 sq. km and it is an important link, via the Andaman Sea, between the subcontinent and South East Asia, and it is the shortest way for ships from the northeastern …
Post a Comment
Reactions:
Read more

By Kathiresan Ramachanderam - July 12, 2020
Despite the fact that Jahangir had given the British East India company permission to set up trading outposts and build factories in Surat, ties between the company and the Mughals would remained strained and these ties would be sorely tested following the death of Jahangir.
Shah Jahan, would be the next to assume the Mughal throne, after a brief battle of ascendency with his brother Shahryar Mirza, a contest that Shah Jahan would win.
During the reign of Shah Jahan, the British East India Company would be left mostly to its own devices, to expand and propagate trade, while the Mughals were busy consolidating their empire which was under threat at the time from local sultanates that were trying to break free and assert their independence, and the Mughals would be forced to fight wars on numerous fronts.
Following the death of Shah Jahan, his third son Aurangzeb would become emperor, and Aurangzeb would prove to be much more astute than his father and would successfully consolidate the …
Post a Comment
Reactions:
Read more

By Kathiresan Ramachanderam - July 10, 2020
Approximately 91 years prior to the formation of the British East India Company, and 11 years after they reached Calicut, a Portuguese expedition landed on the Isle of Mahim, 1 of the 7 islands in the Bombay archipelago, in 1509. Realizing that the deep natural harbor was well suited to their needs, they sought an audience with the Sultan of Gujarat; Bombay was at the time under the control of the Gujarat Sultanate to seek permission to build a fort on the isle of Mahim. It is unclear whether permission was granted or given, or if the Gujarat Sultanate refused, but in 1517 the commander of the Gujarat Sultanate on the island was defeated and the Portuguese acquired Mahim.
The victory paved the way for a Portuguese expansion in Bombay and 9 years later the Portuguese established their first factory in Bassein. Following the building of the factory, some 2 years later, the reigning Sultan of Gujarat, Sultan Bahadur Shah, sent an emissary to the governor of Portuguese possessions in Indi…
Post a Comment
Reactions:
Read more

By Kathiresan Ramachanderam - July 04, 2020
Kalinga was an Indian Kingdom, bordered to the east by the Bay of Bengal that included the whole of present day Odisha, parts of Chhattisgarh, and the northern part of Andhra Pradesh. The kingdom was well in existence when Chandragupta Maurya founded the Mauryan Empire.
The kingdom of Kalinga is mentioned in the Mahabharata. The ancient kingdom of Kalinga according to the Mahabhrata was also located in present day Odisha, so it’s been there for some time. Its capital is given as Rajapura and the daughter of Chitrangada who was the king of Kalinga at the time was married to Duryodhana.
The Kalinga lineage extents all the way back to the five adopted sons of King Vaali or as he was more commonly known, Bali Asura, a devout worshiper of Vishnu.
While Chandragupta Maurya expanded the Mauryan Empire, from its capital, Pataliputra, in Bihar, an empire that would eventually cover the whole of north and central India, Kalinga remained more or less what it was, and the fact that Chandragupta Ma…
Post a Comment
Reactions:
Read more

By Kathiresan Ramachanderam - July 02, 2020
In 1639 the British East India Company acquired its first major trading outpost in India. There were in total three major trading outposts, Madras, Bombay and Calcutta. The acquisition of the Madras outpost was without bloodshed, and it could easily be dubbed an astute acquisition. Madras was in fact the first major British East India trading outpost in the subcontinent.
The history of Madras spans some 2,000 years and it was initially known as Puliyur Kottam. Much of its early history is written down in a series of manuscripts known as the Mackenzie Manuscripts or the Mackenzie Collection which codifies the oral history of the ancient city of Madras.
At the time of the acquisition, Madras was known as Madraspatnam. The word Madraspatnam is a combination of two words, the word “Madras” which denotes the name of the town and the word “pattanam” which means town, and “Madraspatnam” or “Madraspattanam” simply means the town of Madras or Madras town. At the time of the acquisition, the tow…
Post a Comment
Reactions:
Read more

A brief history of the Deccan Plateau

By Kathiresan Ramachanderam - July 02, 2020
The Deccan Plateau is a plateau that is located in south-central India and covers four states, Maharashtra, Andhra Pradesh, Telangana, and Karnataka and bits of Tamilnadu and Kerala and it is bordered in the west by the Western Ghats and in the east by the Eastern Ghats and it is bordered further west by the Arabian Sea and further east by the Bay of Bengal. It covers an area of approximately 422,000 km.
In the Vedas the area that is now known as the Deccan Plateau is referred to as Dakshinapatha. The name is most likely derived from the Sanskrit words “Dakshina” which means southern and “Patha” which means “the way” or “the road” and read together it would mean the southern path or the southern way and that to some extent tells us that the plateau was used as a road to the south.
While there are very little records of indigenous ancient kingdoms in the Plateau, it would be fair to surmise that it came under the dominion of the Mauryan Empire, but there may also have been some influenc…
Post a Comment
Reactions:
Read more

By Kathiresan Ramachanderam - June 28, 2020
Thirty years after the formation of the British East India Company and the setting-up of the initial trading outposts, a young warrior-king was born, in Shivneri Fort, in the Pune district of the western Indian state of Maharashtra. His name was Shivaji Bhosale and his birth heralded a new chapter in Indian history.
Shivaji in the early years was active in the Deccan Plateau, which at that time was divided between three different Sultanates, and after his initial training, the young Shivaji was an astute learner, and even at an early age he had an uncanny ability to come to terms with the on-going three-way power struggle in the Deccan Plateau, he aligned himself with the Sultan of Bijapur under whose auspice he was formally trained and educated. He was first sent to Pune and from there he was transferred to Bangalore.
In 1645, at the tender age of 15, Shivaji gained control of Torna Fort after bribing its commander, and started launching raids into neighboring territories. He would s…
Post a Comment
Reactions:
Read more

The First British Settlement in India

By Kathiresan Ramachanderam - June 27, 2020
In 1608, 8 years after the formation of the British East India Company, the first British ships arrived in the port city of Surat in the western Indian state of Gujarat. The initial reception was somewhat cold and in 1611, the company sought the help of King James I who’d assumed the throne following the death of his predecessor Elizabeth I, and King James sent William Hawkins the commander of the Hector to meet with Jahangir to obtain permission to trade but nothing would pan out.
The East India Company however, having invested a substantial amount in the venture, was not about to give up, and in 1615, King James sent Sir Thomas Roe, an ambassador, to negotiate on behalf of the East India Company. The negotiations met with some measure of success and the company was allowed to set up factories in India, and Surat became the first British settlement in India.
Ironically, the first goods that were transported from the factories in Surat were not spices as many would have expected but rat…
Post a Comment
Reactions:
Read more
More posts